Warning: if you are not already wearing one, and are intending to read to the end of this blog, then you now need to go and find a hat to put on. Go on off you go.

Machynlleth, you may not be surprised to learn, is in Wales and accordingly takes nearly 150 hundred years to reach from London. If you go by rail the last century is liable to be spent on a train so packed and grubby that you may, like me, wish to tweet, ‘Going to cry me Arriva.’

On arriva-l, however, I was cheered at the compliment I received from a chap in the post office on my pronunciation of the name of his town. It wasn’t luck – I had taken a BBC course called Learn How to Say Machynlleth. The key 3 points are:

3. Do not be afraid of the fact that the middle syllable sounds a lot like ‘cunt’.

The town playing host to the comedy weekend is a small settlement of slatey houses in Powys and contains no Starbucks, no WH Smith, no Macdonalds and no Tescos – just the beginning of its agreeable qualities. The inhabitants are a good-natured mix of friendly locals and free-thinking hipsters from around the country. It is very easy to find a nice cheesecloth shirt to buy and I did.

I was there to record proceedings for Radio 4 Extra’s The Comedy Club (of which I am a regular presenter) and to do my one man show. I was also hoping to sneek off for some quality time, rambling and smoking in the gorgeous, sheep-spotted surrounding hills. All these things I achieved with such great satisfaction that I am already planning a return visit next year. There were dozens of acts on in numerous venues of varying eccentricity and the population of the town doubled to 4000 during the weekend the festival was running, as punters, mostly alerted on social media, flooded into town and pitched tent in a handy field.

Machynlleth is not as other festivals for all sorts of reasons: the happy absence of agents, PR people, TV producers, journalists and all the other guff that goes to make so many festivals into corporate events meant that the comics were not fighting for attention or fretting about money and reviews. The atmosphere was relaxed and outdoors-y, seeming to encourage an air of experimentation and creativity. You could engage with your audience and with the other comics in a way that is not possible at big festivals.

Apart from my scheduled stuff, I got to take part in a nude art show, recite poetry on the hill overlooking the town (which, magnificently, displayed a Machynlleth sign a la Hollywood), see a showcase of brilliant young comics, get a tour of the town (once, long ago, the home of the Welsh Parliament), hang with the drunks at the Bowls Club, become embroiled in a hen party, flirt with the ladies in the café opposite the clock tower and do a turn on a shed artfully placed in the broad sandy estuary of the nearby River Dyfi.

Throughout it all, there was a feeling of solidarity among the acts that reminded me a bit of my early Edinburghs when it was still small enough that all the performers could meet after their shows at the Fringe Club and subsequently the Gilded Balloon in Cowgate. If the Edinburgh Fringe is now a pressure cooker, the Machynlleth festival is the sun coming out.

It was all dreamed up by Henry Widdecombe, a sometime stand up, who, upon first going to the Edinburgh Festival, made a list of all the things about it that he didn’t like, and then sought to eliminate them from his own version. So then I say, everybody…… to Henry and to Emma Butler, to all the volunteers they recruited, to Machynlleth and to all its people, I say…… hats off. Come on hats off!

I was sad when it ended (never the case at Edinburgh) but pleased to stay an extra morning to take a hike into the hills. Enlivened, encouraged and enthralled by my weekend I put my iPod on real loud and danced on the summit of a Welsh mountain to the indifference of a dozen sheep. 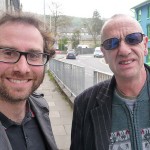 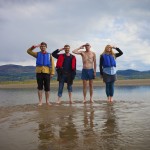 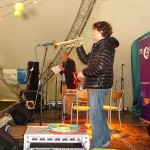 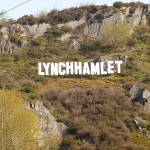 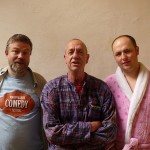