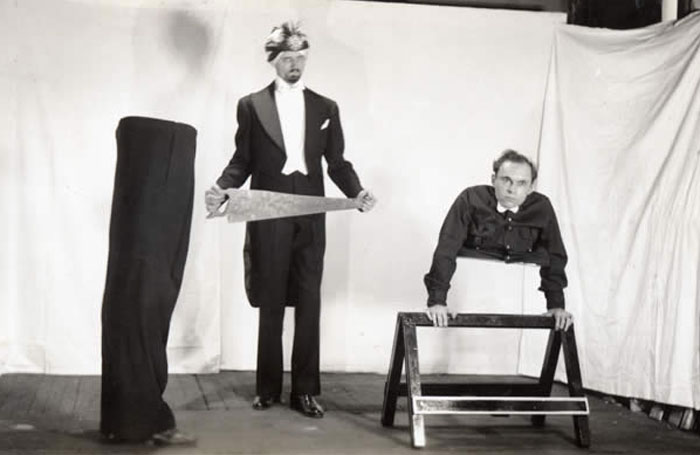 A mate of mine told me about a music-hall act he had heard of which sounds truly amazing (and please note, unlike all TV presenters and everyone under the age of 40, when I use the word ‘amazing’ I do not mean ‘quite good’).

The comedian/magician in question starts by inviting a volunteer from the audience to come up on stage to be sawed in half – a fairly standard gambit then, as now. A rather cocky young man steps up and some witty banter ensues before the young bloke is persuaded to climb into the wooden crate and the magician unleashes his saw.

The sawing begins but suddenly it all goes wrong as the volunteer screams and the magician looks aghast – he opens the crate, blood is everywhere and then the man’s severed leg falls on to the stage…

Having written the above, I realised I couldn’t really remember what the story is, so, of course, I googled ‘act sawed man in half his leg came off’ and found something far more ridiculous, to whit…

Johnny Eck was an American artist/performer born without legs. In 1937, Eck and his twin brother Robert (who did not have his brother’s disability) were recruited by an illusionist called Rajah Raboid who did traditional sawing-in-half but now with an incredible twist.

At first, Robert would pretend to be a member of the audience and heckle Raboid, which got him invited up to be sawed in half himself. During the following business, Robert would then be switched with his twin brother Eck, who played the top half of his body, and a very small man, who played the bottom half, concealed in specially-built trouser legs.

After the ‘sawing in half’, the legs would suddenly get up and start running away, prompting Eck to push himself off the table and start chasing his legs around the stage, screaming: “Come back! I want my legs back!” Sometimes he even chased the legs into the audience – apparently people would scream and even flee the theatre in terror, but once the truth was revealed there was huge laughter and applause.

Bloody hell! I’ve seen some bizarre acts but the biscuit has been taken by this one. My intention when I started this column was to pontificate on the nature of the plant in a show (NB for those non-Equity members: ‘a plant’ here is a person pretending to be an audience member but who is actually in on the act).

I was going to describe the new bit of my show where I invite the audience to baa like sheep and then introduce my plant friend Carrie, who turns out to have a whole range of sheep noises at her disposal. I never reveal I know Carrie, and people leave hugely entertained by our brilliant ‘improvised’ animal act.

But mine and Carrie’s thing seems so tame compared to this story, I’ve decided I am never going to attempt to confirm anything on the internet again.

To Edinburgh then I came…