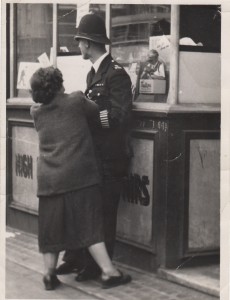 In the meantime, life went on. The Festival of Britain took place. One or two events concerned with my job stand out in my mind.

I was on night duty and walking on Waterloo Bridge at 2am in the morning. I noticed a young lady looking over the parapet. She appeared somewhat distressed. She spoke in a foreign language which, with my linguistic experience I deciphered as German. It was fairly obvious that she had suicide in mind. After some time I managed to escort her off the bridge and walked her to the station where we later discovered she was reported as a missing person.

On another occasion whilst on patrol in London Road at the Elephant and Castle during the day a lady approached me and threw her arms around me and demanded a kiss. She wasn’t exactly an Elizabeth Taylor. She stank horribly of stale beer. I was somewhat flattered by her persistence and at the same time very embarrassed especially as an audience had gathered. My only option was to arrest her, which she seemed to enjoy. Unknown to me, a photograph had been taken by someone and a few days later 2 arrived at the station and were presented to me.