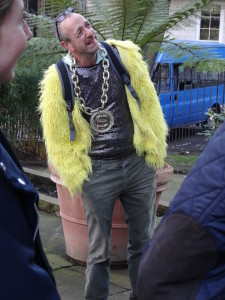 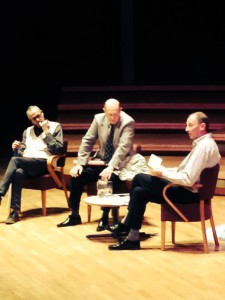 No doubt we all consider other lives we might have led. What if I had accepted that offer to train as a teacher when I was 24 and appeared to have few other prospects? Maybe I would now be a head teacher in, say, South Yorkshire with a wife who is a nurse and a regular part in the village panto?

Whatever other job I might have done I doubt it would be as varied and faintly ridiculous as the one that is being a comedian. As evidence of this let me list 5 of the gigs I did in the January that has recently floated off down the swollen river.

January 19.   Arthur Smith’s walking tour of Soho. I meet my audience in Soho gardens and take them off round the thronging streets where they pass a man in a tree, a couple snogging vigorously at every street corner they pass, a chorus line singing ‘Happy days’, a man dressed as a banana and, er, Paul Merton. I had planned the first 2 of these but the others have arisen by chance. Back in the gardens I signify the end of the walk by dancing dervishly in my new silver onesie.

Jan 22nd.       I have agreed to do a ten minute spot at the Comedy Cafe in London for an audience of French people. Thus I must deliver my set en francais. As it turns out  je me debrouille.

Jan 23rd.      A late booking this, but one that intrigues. I journey to Birmingham Symphony Hall to join Sir Geoffrey Boycott and Jonathan ‘Aggers’ Agnew to talk about cricket and the disastrous Ashes tour that is just dwindling to a dismal halt. I try out a few shots in front of Sir Geoffrey who is suitably unimpressed…..

Jan 24th        MC-ing a comedy night in my local school (Ravenstone Primary School) for the parents, many of whom I have passed in Balham as they hurry to collect their kids. Tonight, however, they are all pissed and extremely aimiable. They make a great crowd and me and the other 2 comics (Ivo Graham and Jo Caulfield) all have a brilliant gig. It is nice to have a 2-minute walk home after too.

Jan 26th      Compering the NATYs – the New Act of the Year Awards in the Bloomsbury Theatre in London. This is the oldest and most respected of the New Act competitions and the list of its finalists contains many names of comics who have since become famous. There is a superbly wide selection of styles but most of the audience agree with the judges’ choice for the coveted title, ‘Top of the Bill’ (the word ‘winner’ seems to have banned), Alasdair Beckett-King, a suave stand up with some killer lines.

Jan 28th    Lunchtime finds me in the downstairs bar at the Prince of Wales theatre where I do a turn to kick off the Critic’s Circle Theatre Awards. There are some distinguished actors and all the number one critics who nod sagely when I say that being a theatre critic these days is like having Kim Jong-Un as your nephew.

So that was January. In February my itinerary is more predictable – I am doing Arthur Smith Sings Leonard Cohen (Volume Two) at the Soho theatre from Feb 16th for 2 weeks and, although that Yorkshire panto would no doubt have been fun, I am pleased to be a stand up comic with all its ludicrous adventures. Not too long to the bluebells now….