The train taking me to Nantwich ground to a halt in a tunnel outside the station. It was hot, crowded and we passengers (‘customers’ as we have become – how ludicrous and irritating) were sweating and exasperated. There was a bing-bong and then the following announcement. ‘Good afternoon, this is your driver speaking. I’m sorry for the delay. This is due to the fat greedy gits who own this company.’

‘All they care about is money – they’re not bothered about your pathetic trip to Nantwich. Where is Nantwich anyway? I don’t know and I’m the driver of the train.’

Now, despite the stuffiness and discomfort, people were giggling – an exceedingly rare occurrence on a British train. He continued, ‘Or rather I was the driver of the train – you may take this as my resignation.’  Loud hoots of merriment reverberated between the carriages. ‘And while I’ve got your attention I’d like to tell you about some trouble I’ve been having with my wife…twenty five happy years – and then we met each other.’

Everyone was laughing as the driver continued with a stream of ripe old gags and, in true showbiz style, closed with a spirited rendition of the Monkees great hit, Take the Last Train to Clarkesville, substituting, of course, ‘Nantwich’ for ‘Clarkesville.’

When finally we crawled into the station, we had been united by one man and we all had a tale to tell. That man was a hero, or rather he would have been one had he truly existed instead of being a character I dreamed up to demonstrate my theory about the healing power of laughter. It’s true though isn’t it? On the rare occasions when a train driver departs from his (or her) script, makes a witticism that shows their humanity, there is an instant bond created between the passengers sharing the moment.

My old routine came back to me when I agreed to participate in a scheme aimed at tube drivers on the Piccadilly line of the London Underground. They were each given a booklet containing weighty or humourous quotations selected by the artist Jeremy Deller, a splendid, creative fellow who pays the public the tribute of looking like an artist. My job was to do a gig for the drivers, encouraging them to read some of these quotes out over the PA to supplement the normal diet of obligatory and superfluous phases. Eg  ‘As one gets older, one discovers everything is going to be exactly the same with different hats on. Change here for the Hammersmith and City line.’ Or   ‘He who digs a pit for another will fall into it himself. Mind the gap.’

I was really hoping I could pull this off so that I could have a hand in resisting the impersonal and ever-multiplying announcements that anyone who uses public transport is obliged to hear. ‘Smoking is not permitted anywhere on this train.’ Really? I never knew. The example I find most insidious and depressing is, ‘If you see anything suspicious please report it to a member of staff.’ I don’t know why they don’t just say, ‘see that bloke opposite? I bet he’s an evil bastard.

If the scheme had gone well there were plans to extend it to other underground lines but alas, since my gig I have never heard a quote from Plato as I stood on a tube in the rush hour with a stranger’s head up my jumper. I think it felt too weird for the drivers to start delivering lines from the solitude of the their cabin at the front. Besides they are tube drivers, not public speakers. Oh well, can’t win ‘em all – go for bronze.

That is the end of this blog. Please remember to take all your possessions when leaving the page. And remember – laughter is the one true metaphysical consolation. 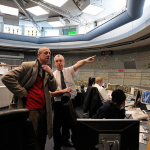 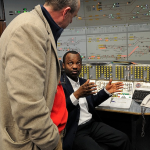 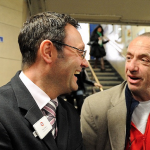