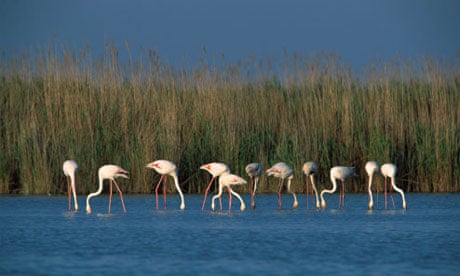 A comedian walks into a bar … and tries to cheer up the glummest waitress in France. But will she get the gag?

I had gone to a friend’s place in the south of France intending to forget my broken heart by writing a comedy show for the Edinburgh Fringe. Arles, as occupied by Romans and painted by Van Gogh, is an exquisite little town but, for three days, all I had done was moon joylessly around the house sipping brandy. I felt little enthusiasm for France, life, comedy, or anything really.

Disconnected, that’s what I was. On the third evening it occurred to me that I needed to get out.

So the next day I hired a bicycle and set off south into the broad, even, watery Camargue – home to horses, bulls, mosquitos and many breeds of bird, most famously the flamingo. The flat terrain suited my mood and empty roads smoothed my way. After a couple of hours I spotted a spire on the horizon and turned towards it. The crooked old church was now a crooked old bar, dark and gloomy after the bright blueness outside.

Inside an old lady in black with a sad, distracted air served me a cold beer and a sandwich jambon. Poor old girl, she seemed even glummer than me. I decided to try my French out. “Do you ever get flamingos come into this bar?” I inquired.

She stared at me, totally baffled.

It was not much of a gag (though I was planning to follow it up with a question about them falling over) but it seemed to pole-axe the woman. Flamingos in the bar? What was this peculiar foreigner talking about?

Then I saw it dawn on her – it was a joke! She broke into a broad if toothless smile. The thought now tickled her. She started chuckling and I could see that this silly remark by a passing tourist had reawakened in her the memory of laughter, that I had, by chance, unlocked something. The chuckling gave way to cackling and full-bloodied hooting and her bleak introspection seemed to dissolve, to reveal a wrinkled but open and beautiful old face.

After I’d eaten my lunch she came outside to wave me off as I set off again out into those broad Mediterranean skies. Arriving back in Arles I sat straight down and started writing.

It is 15 years since that cycle ride and I am preparing for another tour of my solo show (the “gentleman’s tour” – a handful of dates in agreeable places). I will, where possible, stay after the gig in a nice hotel, breakfast on porridge and kippers, then spend the day rambling in the countryside (note to self: get OS maps for Abingdon, Frome, Stratford and Barrow).

What I see in the mirror
What makes me happy