Reminiscences of my first Edinburgh Fringe

Reminiscences of my first Edinburgh Fringe  (extracted, and slightly amended, from my memoir ‘My Name is Daphne Fairfax’

In late summer it is the only thing to do. For two of the past 30 years I have missed it and both times I felt like all my friends were having a terrific get-together while I had stupidly chosen to stay home and sulk. The Edinburgh Festival is one of the world’s great parties, an orgy of self-expression that encourages experimentation and welcomes the amateur performer as well as the professional. It has provided a ravishing playground for my own imagination and the things I have done in my career of which I am most proud all started, in one way or another, in this stern, dramatic, unique city in the month of August where the streets are alive with young wannabes chanting the performers mantra:

My adulthood has been measured out in Edinburgh Fringes and if the event did not exist I would have had a different life. Whenever, for some reason (like writing an autobiography), I wish to identify what year something happened, my first reference point is the roster of stuff that lodges in my head recording, in roughly chronological order, every show I  have done in Edinburgh. Not every show you understand. Not all the one-off cabaret gigs, the guided walking tours, or the cameo appearances in odd plays, the benefits, the ‘best-of-the-fest’s, the processions, the sideshows, the radio spots, the pod casts, the press stunts, the state-of-comedy seminars, the TV programmes, the hospital charity gigs; not all of them – no, I mean the ones that inspired me to go up to the festival in the first place, the shows which I (or some sort of we) had prepared, budgeted for and advertised.

All those summers lay before me when we arrived in1977, buoyant and optimistic with our revamped version of the show we had performed at college, SwingalongaDante, subtitled, ‘…dahlings, it’s the Divine Comedy.’  We drove up from Norwich in a grubby yellow van stuffed with costumes, props, posters, programmes and hope. If we sold 25 tickets a night we would break even; if the audience numbered 50 or more we would make a small profit. That must be possible – after all, we had some great quotes from the Eastern Daily Press and the Primary School which served as our venue was famous for a wee pupil called Sean Connery. I spent 3 days failing to do as little as possible in the frenetic preparations for our opening, which first required us to convert the school hall into a theatre. The other members of the team were aware by now that I had a total lack of practical skills but I joined in grumpily sticking up posters, hustling, begging, giving out fliers, borrowing coat-hangers – all the palava of ‘let’s do a show right here in the barn.’

On the Sunday morning before our Monday night première, exhausted and, in my case, hungover, we took part in the traditional opening parade in which Adam had secured us a place. Clutching bags stuffed with costumes, we walked to the gathering point along a line of waiting lorries, until we located the spot reserved for us where it was revealed that, unlike all the other local businesses and fringe groups on the parade, we did not have a lorry and would be obliged to proceed on foot between floats at street level – the poor bloody infantry among the divisions of rolling tanks.

The float in front was occupied by members of the Cambridge Footlights Revue, who easily found room on their commodious lorry for our bags and shouted down encouragement. The Footlights had history, experience and a big oily machine behind them; they had already been on tour with their show, had a large venue, a guaranteed audience and an air of self-confidence that we, mooching around the gutter in our cheap wigs, could not match. Meeting them here, I felt a little of my dad’s humility in the presence of members of the establishment – the officer class. These young men with their pedigree and superior A-levels were probably much funnier and much cleverer than us.

Miind you they had no Babs and Max who gathered the handouts and bravely strapped themselves into their uniform of fishnet tights and high heels, while we boys pinned up our baggy leopard-skin underpants. These ‘nappies,’ worn with white shirts and unconvincing false moustaches, constituted the costume of the ‘Canaletteloni* Brothers, a frenetic bunch of acrobats – all called Luigi Cannalleteloni –  whose enthusiasm, since none of us were acrobats, outstripped any genuine tumbling skills. To a furious piano accompaniment, we would run on, manically shouting in mock Italian, and commence banging each other’s heads with tin trays, leaping through hoops and performing extravagant forward-rolls. Adam would drag up a member of the audience to stand on his shoulders, while in one trick I launched myself dangerously over Adam and Phil to crash to the stage behind them. Wagons roll. We canellettoloni-ed along Princes Street to cheering crowds, convinced we would draw enough attention to sell dozens of tickets.

For our début public performance I treated myself to some clean socks.  My brother and his girlfriend, with whom I was staying in Edinburgh, arrived twenty minutes early with a friend, bought a programme, and took their places, while Rick, ‘Banana Fingers,’ tinkled on the piano. Then my mate Lindsay showed up. We waited nervously in the school toilets that were now our dressing room. After half-an-hour it was apparent that no-one else was coming. Our audience numbered 4 people, all of whom we knew.

Fucking hell, what a bummer. We felt utterly dejected. What had been the point of the posters, the fliers, the parade? We had been wasting our time and I, at that point, would happily have packed my bags and gone to London – Babs, I think, may have felt the same. But Adam and the others were not going to give up so easily. I was out-voted. We would continue the run, and what’s more, we would not cancel this show. Twenty minutes later, during our opening salvo of audience participation, anyone entering the  School hall would have seen the cast and the entire audience standing on stage swinging-along-a-Dante to a hundred empty seats.

* NB The number of n’s, l’s and t’ s in ‘Canneletteloni’ has never been agreed.

In the next few years our troupe became known, above all, for our enthusiasm and energy, both onstage and off. Galvanised again by Adam, the following day, and every subsequent day of the festival, we returned to the streets of Edinburgh, singing and dancing outside the Fringe box office, cajoling passers-by, button-holing journalists, and doing anything we could think of, however desperate or humiliating, that might increase our ticket sales. By the Thursday the audience at last outnumbered the cast and, on Friday, we hit double figures for the first time. Things were improving but I remained disconsolate – I estimated we were each putting in about six hours work for every 50p ticket sold – but at least performing the show was becoming less embarrassing and the few people who came seemed to be enjoying themselves. Whenever we could we did a spot at the Fringe Club on the Royal Mile, where performers gathered after their shows to compare notes, watch the cabaret, dance, get drunk and sleep with each other. Nowadays there are too many shows at the festival for there to be one central performers’ bar, which is a shame because it was a fantastic place to end your evening, equalled in bibulous exuberance only by the bar at the Gilded Balloon a decade later.

We took time off only to attend other comedies which, I noted, were all significantly shorter than our own two hours of fun. The Footlights boys were good, but no funnier than us, while the Lancaster University Revue, presenting Hayley’s Vomit were definitely worse. Chris Langham’s show was the most hilarious and featured the funniest thing I saw that year – Jim Broadbent doing his ‘jazz dancing.’ Langham cut a dashing figure with his famous girlfriend and his reputation as a TV writer. I heard with amazement how someone would ring him up and offer him £20 quid to write a joke! ‘That must be good,’ I thought.

Our audience numbers continued to grow, as did the number of pints I consumed at the Fringe Club after the show. During one performance in the school hall I was afforded a foreglimpse of the type of confrontation that awaited me on countless nights to come when a drunk persistently interrupted my Max Miller routine. I did not then have the resources to deal with hecklers but at this, my first public barracking, it did not matter because one of our new friends in the Footlights, who was sitting in front of the drunk, turned, and inviting him to ‘Shut up, you Scottish cunt!’ punched him in the face A small scuffle petered out as the lights came on and the rueful heckler left, along with 12 others, thus halving our audience. In the last week we received a good review in the Scotsman – no doubt it would have had 5 stars if reviews had been graded then. Or perhaps 4 stars since there was one caveat among the heavenly inches of praise. My cricket strip, a succès d’estime in Norwich, was declared, ‘unfunny in the extreme.’

On the final night of our run, hoorah, we sold out to a raucous crowd who laughed and clapped. Afterwards, in spirits as high as Arthur’s Seat, I capped the evening by finally copping off with a woman who, I was to discover, became a nun soon after.  Edinburgh had supplied a mixture of emotions, the extreme contours of the experience fitting perfectly the geography of the city itself, but when it was all over the only thing I wanted to do was to repair to my new pad in London and lie down. I had gone to the festival thinking of it as a fun holiday which might pay for itself, a kind of full stop to my university career; I had not bargained for the sheer hard work it entailed. There were a lot of funny, ambitious people around in Edinburgh, funnier and more ambitious than I. We had worked our tits off, but nothing had  come of it and I was more in debt than ever. I didn’t expect to return to Edinburgh. However, when I recounted our adventures to my mate Dave in a London pub and he asked, ‘Will you ever go on stage again?’ I could not `bring myself to say ‘no.’ And I guess the only time I ever will say no to that question will be during the endgame of my death.

Unless, of course, I play out the secret fantasynightmare of every comic, and die on stage. 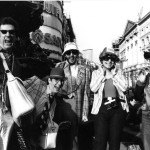 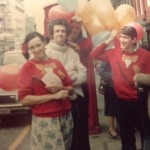 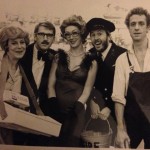 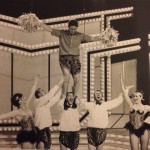 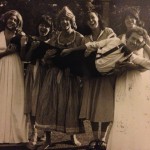 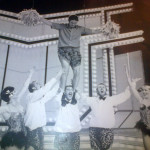 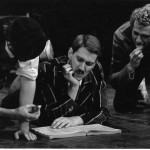 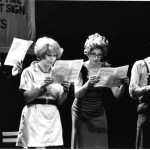 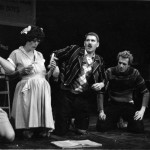 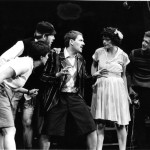 Comments on "Reminiscences of my first Edinburgh Fringe"