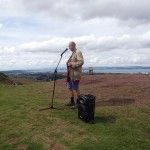 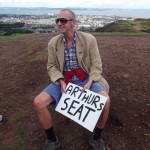 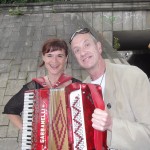 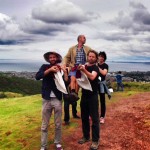 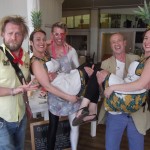 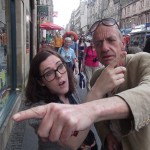 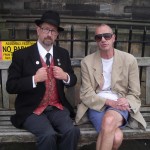 When you have appeared in as many as Edinburgh fringes as I, you are allowed the occasional easy one; this year I have been in town but only doing radio stuff and a few one-off gigs, which means I have been joyfully immune from fretting over reviews, audiences and from having to source a prop kipper minutes before curtain up.

Although audience numbers are down and number of shows up, I have nevertheless detected an especially joyous atmosphere on the cobbled streets this year. It may be a carry over from the Olympics, or possibly an eat-drink-and-be-merry-for-tomorrow-we-are-all-skint spirit but it sure feels good in Auld Reekie.

Some fringe highlights: Fletcher the Butler is a nicely suited chap who will come and be your unpaid butler for as long as you wish; he is prepared to run errands, make tea, receive abuse and read poems by William Mcgonagall. Similarly, in the Hunt and Darton ‘pop up café’ off the Royal Mile, 2 witty waitresses with pineapples strapped to their heads will not just serve coffee but perform funny poems and sketches for you.

She is not a fringe act but Catherine the Great is also appearing in Edinburgh this year at the National Museum of Scotland where you can learn about her voracious interest in art, philosophy and her huge contribution to the Enlightenment – my only disappointment was that I could find no reference to her rumoured affection for horses…..

My favourite afternoon of the festival, and one of my best ever, has undoubtedly been the surreal couple of hours I spent in the presence of the splendid comic experimentalist Barry Ferns. Barry, who for a previous show changed his name to Lionel Ritchie (honestly), is putting on live stand up gigs on Arthur’s Seat. On Saturday Barry made a special effort on my behalf – since he (correctly) assumes Arthur’s Seat is named after me; he had somehow persuaded 5 other blokes to help him carry me to the top in a sedan chair (so called because you can sedan in it).

Having deposited me in the audience Barry started by telling us about the venue and quoting some of the ludicrous ‘reviews’ of Arthur’s Seat people had posted on the Trip Advisor web site (‘beautiful views – but not much else. 2 stars.’ ‘It was bigger than I imagine, quite intrusive, it would be more exciting if you can get a tour inside’). He then introduced the very funny Joel Dommet, the uplifting music of ‘A Moveable Feast’ and then man-of-the-moment, the wild-haired comedian Tony Law. Tony was great but upstaged by the appearance of a tiny boy and an even tinier girl who were determined to grab their dad’s mike and have a go themselves. They did this to such great effect that Tony left the arena and left them to it. As Barry pointed out it must have been a strange sight for anyone who happened to be out on a stroll up the venerable seat – a crowd of 150 laughing heartily at two six year olds doing stand up on top of a mountain……. Ah, but it is of these wondrous surprise moments that the Edinburgh fringe is made. Sod all the arena guys and the corporate stuff – this was the very essence of a comedic event. Take a bow Barry Ferns.